The Z CAM E2-F6 is a 6K cinema camera that packs a powerful punch in a small body. With a Full Frame CMOS sensor and EF lens mount it is capable of producing results that defy its compact proportions. Adding the Ninja V HDR monitor-recorder transforms the Z CAM E2-F6 into a complete RAW shooting system. Capture stunning 12-bit Apple ProRes RAW at up to 6Kp30 over HDMI directly from the camera’s sensor for maximum detail in shadows and highlights, then monitor accurately on the state-of-the-art Ninja V high brightness screen for perfect HDR or SDR images. Simply put the Ninja V will give Z CAM users the best possible image from the camera. 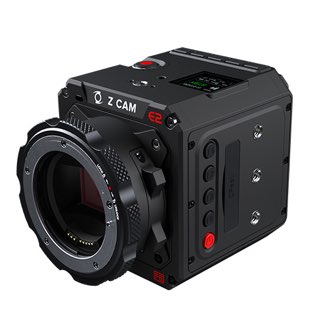 At the heart of the Z CAM E2-F6 is a Full Frame 35mm CMOS sensor with mazing 6K image quality, color science and low light sensitivity. All details can be perfectly preserved when sent over HDMI to the Ninja V for recording in 12-bit ProRes RAW, bypassing the camera’s internal processing and delivering the data for superior processing in the computer. For extreme reliability and affordability the Ninja V records to AtomX SSD mini SATA drives, or other approved SSD media. The Z CAM E2-F6 and Ninja V can now record 12-bit Apple ProRes RAW at up to 6Kp30 via free firmware from Z CAM and an AtomOS update from Atomos.

Cinema camera and the Atomos Ninja V HDR monitor-recorder in Apple ProRes RAW it demonstrates the amazing color and detail that is possible with the combination.

The stunning series of macro shots were captured with Laowa macro lenses and edited and graded for HDR and SDR (Rec.709) versions in Apple Final Cut Pro X. The Z CAM E2-F6 combined with the Atomos Ninja V HDR monitor-recorder creates incredibly detailed full-frame 12-bit 5.8K ProRes RAW images with wide dynamic range and beautiful colors. The E2-F6 interchangeable lens mount allows a massive range of cine and stills lenses to be used and their images perfectly preserved in an efficient RAW format. This RAW image is accurately displayed on the Ninja V in PQ or HLG HDR modes for maximum insight into the image when viewing. Using Atomos RAW over HDMI technology allows this compact cinema camera to record up to 5.8Kp29.97 or 4Kp59.94 RAW direct from the camera to reliable and affordable SSD media. The dual native ISO feature provides exceptionally clean RAW images with minimal noise even in low light. The images created are perfect for HDR or SDR (Rec.709) production.

“I’ve been filming with Z CAMs since the first E2 M4/3 camera came out, but the most interesting camera for me is the E2-F6 due to it’s 6K full frame sensor and wide dynamic range. Pairing this sensor with the ability to record ProRes RAW via an Atomos Ninja 5 makes this a really powerful combination.” James Tonkin, DP

Go behind the scenes of UN/SEEN, an artistic abstract short film by filmmaker/director James Tonkin. Shot on the Z CAM E2-F6 full-frame cinema camera and the Atomos Ninja V HDR monitor-recorder in Apple ProRes RAW it demonstrates the amazing color and detail that is possible with the combination.


Take control of the Z CAM

Atomos have also released new camera control functions for all Z CAM models that allow key functions to be set from the Ninja V via the monitor’s touchscreen. The Ninja V connects via USB-C and allows two-way communication for a range of controls such as record start/stop, iris, shutter speed, ISO and eND. The Control feature works whether recording internally in the camera, or externally to the Ninja V. The camera constantly updates the Ninja V with the value of each setting, which is in turn displayed clearly on the monitor. As a result you can now record ProRes RAW from the camera and still be able to control main camera functions at the same time on the Ninja V screen.

The Ninja V is the ideal monitor for the E2 range. Atomos’ state of the art, high brightness HDR screen technology on the Ninja V becomes the ultimate monitoring solution for the E2. The Ninja V also allows users to accurately monitor the RAW signal on its daylight-viewable 5” HDR screen, previewing it for HDR in a choice of HLG and PQ (HDR10) formats. It offers touchscreen access to tools like waveforms, magnify or engage peaking check focus for each angle and make any adjustments to get the perfect HDR or SDR shots.

Combined with the RAW power of the Ninja V the Z CAM E2-F6 has a plethora of uses. The camera already has a proven track record for commercials, documentaries, TV series and even feature films. There are also an increasing number of creative and innovative applications. With the ultimate picture quality the Ninja V and ProRes RAW bring to the F6 there’s almost no limit to your creativity.

Creators are granted complete creative control of their video images in post-production as Apple ProRes RAW combines the flexibility of RAW video with the real-time performance of ProRes. The format gives filmmakers incredible latitude when adjusting the look of the their images and extending brightness and shadow detail – making ProRes RAW ideal for HDR workflows.

In addition to their groundbreaking combination of flexibility and performance, ProRes RAW files are smaller than other RAW files – simplifying and accelerating file transfer, media management, and archiving. ProRes RAW files can easily be edited on most modern Apple Mac systems.

Have you updated to the latest firmware

Based on your camera selection, we suggest the following complementary Atomos product.